Members of the New Mexico Roadrunner Chapter of the Red Hat Society in Alamogordo, New Mexico attended an eclectic tea hosted by Queen Ladybird aka Carla Kerr and Marquesa Corte Alegre aka Jean Courtier in the Queen's home.

Fourteen were in attendance and two tables were beautifully appointed with the Queen's antique collection of teacups, crystal plates and gold cutlery, red tablecloths with purple or red napkins. Teapots were covered with various tea cozies keeping the water hot.

Offered were an assortment of teas, scones, cookies, finger sandwiches, along with Devonshire Cream and various jams, jellies and lemon curd for the scones. A beautiful red velvet cake decorated in the Victorian style with purple icing with roses and red icing lace was also enjoyed.

Queen Ladybird gave a short talk on the history of the Kazoo as it was also National Kazoo Day and the ladies played "Happy Birthday" to the Kazoo on their Kazoos.

There was also surprise salon entertainment in which Queen Ladybird changed into costume to sing a cute song from "Oklahoma" titled "I'm Jist a Girl Who Cain't Say No". She also stated that this musical opened the first time on Broadway on March 31, 1941 with Celeste Holm singing this particular song.

Attendee Darla Shelley won the door prize, a lovely Red Hat cup showing "Share the Love" and each Red Hatter had a new button at their place setting showing a Red Hat and "Share the Love" on them. There seems to be so much negativity in the world these days, we thought we would accentuate the positive!


It was such a FUN day and everyone seemed to enjoy themselves so much. Carla made it to the couch and spent the rest of the afternoon and evening mostly sleeping and Sunday was another mostly lazy day. These teas can take a lot out of older gals and Jean was in the same mode when she got home. But, it was definitely worth the efforts and we #ChooseFun!

Again, thank you to Douglas A. Kerr, Photographer for the great pictures.

This is all I have to say for now.
Posted by C C Crittenden at 2:38 PM No comments:

Vice Queen Donna Williams and Queen Carla Kerr of the New Mexico Roadrunner Chapter of the Red Hat Society left Alamogordo, New Mexico on Friday morning, January 13, 2017 driving to Tucson, Arizona for Red Hatter Marilyn Cresci's 80th Jubilee Celebration. The trip was fairly uneventful until they got into Tucson and there was so much street construction it took them a while to find the little hotel they were staying in that night. They checked in, ordered pizza delivered, ate and fell into bed.

On Saturday morning, they had an ample breakfast at the hotel, checked out and followed sister Red Hatter Kimberly Gugliotta to the El Charro Mexican Restaurant (reputed to be the oldest Mexican restaurant in the U.S.) where she treated them to lunch. Afterwards, they followed her to the road leading to the top of A Mountain (University of Arizona "A") which has a phenomenal view of the city of Tucson. However, there was a short detour because right at the entrance, Carla discovered that her gas tank was almost on empty. Kimberly graciously led them to a gas station and they went up the mountain after this.

Back in the 1940's Carla's grandparents had a small grocery store in Tucson and her family lived in Coolidge, Arizona. They visited there quite often. It was really a shock to see how huge Tucson is now.

Carla and Donna drove from there to the Marriott Starr Pass and checked in for the festivities. This is one of the most beautiful resorts in the country. It has an Arnold Palmer golf course, if that tells you anything. The saguaro cacti are everywhere, one more beautiful than the next. The hotel is exquisite and luxurious.

There was a meet and greet cash bar where those who had arrived got together and took a lot of pictures and had a grand time, noshing and catching up on each other. Suddenly there were all these waiters with trays filled with shots of the tequila of the day which they handed out to everyone and at 5:00PM on the dot they raised their shot glasses and toasted Pancho Villa.

Sunday morning, Carla rose at 6:30AM, showered and dressed and headed back to the little bar to take part in the ceremony greeting the sunrise performed by Lakota/Navajo Indian Larry Redhouse. He played his flute so beautifully and spoke. He taught them how to make a prayer bundle and since the rain had finally subsided a bit, he led them outside where he again spoke and had each one say a prayer and throw their bundle into the fire pit. He than led everyone back inside to make another prayer bundle to take home as a souvenir. Carla introduced herself to him explaining that she is a card carrying  citizen of the Cherokee Nation in Oklahoma. During the conversation, Larry explained that he has been a jazz pianist for the past 45 years. He is a very handsome and talented man.

There were vendors for shopping as there usually are at every Red Hat event and Carla and Donna did their fair share of that. Then, it was back to the room and getting ready for the celebration. It was well attended and everyone there was upbeat and positive and such a FUN group to be among. Entertainment was provided by Sly Man and Sheryl Ann featuring jazz and swing. There were little gifts for everyone and raffle tickets for door prizes. The lunch was delicious. Marilyn sure knows how to throw a party!

Monday morning it was time to dress and pack and hit the road back to Alamogordo, but they stopped at the Waffle House just before getting on the highway and had breakfast. Carla drove the return trip in 5 hours and Donna did her part by talking and keeping Carla alert (well almost, but we won't go into that here). It is always good to get home in ones own bed. 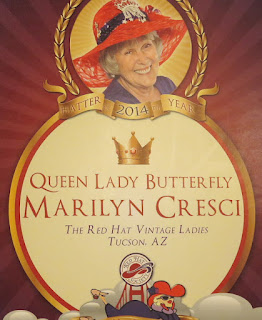 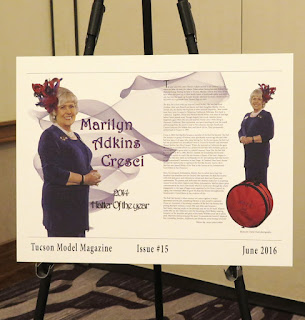 Happy Birthday, Marilyn Cresci! Thank you for inviting us to celebrate your 80th Jubilee with you at this fantastic hotel in Tucson. See you in New York City in February.

Posted by C C Crittenden at 8:26 PM No comments: