Today, we went to the Southern New Mexico Festival of Quilts at the Otero County Fairgrounds here in Alamogordo. There were some beautiful, quite artistic quilts on display and we each voted for our favorite. Along with all the quilts, there were a number of vendors presenting quilting machines, regular sewing machines and embroidery machines. Several quilt shops were set up in their booths with stunning arrays of fabrics along with samples of quilts they, themselves had made. It truly was a feast for the eyes.

It's always interesting to note the names proprietors create for their quilt shops such as, Sew Many Visions, Sew What's New and a personal favorite, The Stash Sisters. If you hear of a quilt show coming to your area, you should check it out. You'll be surprised at the artistic abilities of the women and, yes, men too.

After our visit to the quilt show, we decided to try out the new restaurant in town, Carino's, just as Italian as it sounds. We kept hearing about it from various friends and we were not disappointed. Doug started out with Minestrone Soup that he said was quite enjoyable, but could have been a bit warmer. Then, he had the Green Chile Chicken Lasagna and he couldn't stop talking about how good it tasted. He said, "It is nice and light, yet it has plenty of chicken and the sauce is delicately delicious."

I led with the house salad and then had Shrimp Scampi with angel hair pasta and artichokes. I was in food heaven with the first bite of the Scampi. The shrimp were cooked perfectly and the seasoning was superb. We were offered the dessert menu, but we were unable to finish our entrees, asking for to go boxes, so no dessert for us. I highly recommend Carino's for a delectable Italian meal. Alamogordo finally has a class A Italian restaurant and we trust they'll be around for a long time.

This is all I have to say for now.
Posted by C C Crittenden at 10:22 PM No comments:

On Sunday, June 17, 2012, Doug and I drove to Santa Fe, NM because I had a doctor's appointment the next day. It is about a four hour drive from Alamogordo and for the most part the roads are good. There is some highway construction and at one point, out in the middle of nowhere, there was a traffic signal because the highway had been shrunk down to one lane. You must wait for the light to turn green before proceeding. Evidently, a guy on the other end got antsy and ran the light. When he saw us as well as other vehicles, he pulled off on the shoulder to let everyone pass. His face was an interesting shade of red! Once we checked in at the Super 8 Motel (actually nicely decorated in a Southwestern theme with a well appointed room), we decided to take a drive to the Nambé Pueblo (an Indian village style of living inNew Mexico). Doug was ready with his camera.


We actually drove there to see the waterfalls, but they are only open Thursday through Saturday. On our return to Santa Fe, we stopped to look at "Camel Rock" and found a little friend. 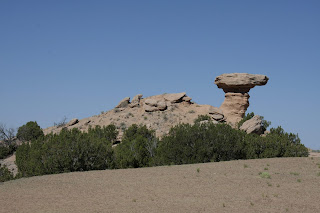 We drove back into Santa Fe and decided to dine at Outback Steak House. Some of the kids had given us gift cards to this establishment at one time or another. There is no Outback in Alamogordo so we decided to take advantage of being close to one. Being Father's Day, it was busy and we were asked if we would like to sit in a booth at the bar. Good decision. Great place for people watching, right near the door and the food was great. We started out with one of their famous blooming onions; Doug had steak and a fully dressed baked potato and I had a half slab of baby back ribs and fries. We were waddling by the time we consumed all that food and didn't even have room for dessert!

My doctor's appointment wasn't until 1:30 p.m. on Monday so we decided to drive to downtown Santa Fe and went to the Museum of Contemporary Native Arts. I was pleasantly surprised when the lady at the counter told me I would not be charged the entrance fee because I am a citizen of the Cherokee Nation. We saw some lovely creations, some of which Doug photographed for your enjoyment.


After touring all of the galleries, we went outside to view still more exquisite creations.


I went to my doctor appointment and am relieved to be able to say that there is no evidence of any recurrence of tongue cancer. He told me to come back in a year for a check up. On the drive home, we stopped at the world famous Clines Corner for lunch. This place started doing business in 1934 and is on the renowned Route 66. The food was surprisingly good and while we were eating we were treated to viewing a couple of barn swallows feeding their young in a nest up under the overhang.

As we came through Carizzozo, NM, we were able to see the smoke billowing up to the sky in the mountains from the Little Bear fire. We are fortunate in that we've only had smoke blow our way.

New Mexico truly is the "Land of Enchantment" and any drive you make in any direction is never boring. Next Monday, we leave on our longest drive yet, to the Grand Canyon and then on to Las Vegas for the International Red Hat Convention at the Paris Hotel.

Life has zipped along at an extremely rapid pace for us since Thanksgiving 2011. The day after Thanksgiving, Doug and I were driving to Irving for lunch with his daughter, Nancy and granddaughter Julia. As we drove along Doug says, "You know, with this economy slumping so much and our investment portfolio going down with it, we need to be thinking of truly downsizing in the next five years. If we don't, there's every possibility of us winding up in a piano crate under a bridge." I nodded affirmatively as he continued driving. A few minutes later he says, "Maybe we need to do this in the next two or three years." Again, I agree with him. About ten more miles down the road he says, "We need to do this now. What do you think?" I tell him I'm with him however he wants to proceed.

We had a lovely visit and luncheon with Nancy and Julia and picked up our conversation on the way home. Doug says, "Id like to move some place further west." The wheels started turning in my brain and I recalled living in Arizona as a child, but do not now like Arizona politics. Doug had lived in Albuquerque forty years ago and fell in love with New Mexico. I told him New Mexico sounded good, but not Albuquerque because it's too far north and cold. Besides, it's a large city and would still be too expensive. Doug says, "Okay. We'll look about 200 miles south and 2500 feet lower on the western side of some eastern leaning mountains." Upon arriving home, we looked on a map and lo and behold-Alamogordo popped up. Doug immediately sent an email to the mayor asking about Alamogordo and a good real estate agent. Mayor Griggs responded quickly saying, "Come on. You'll love it here and here's the name of a great real estate guy."

I started receiving emails of listings right away. We got through the holiday season and in January, I zeroed in on six homes. We drove to Alamogordo and as we started driving through the Sacramento Mountains in New Mexico, I was hooked for sure. We came in a day early so we would have time to drive around the town and get some idea of what we were getting ourselves into. The next morning we met the real estate agent and I was ready with a list with the one I was most interested in at the top. We went in, looked around, and Doug said, "Well, what do you think?" I replied, "This is the one." We went back to the office and made an offer and returned to Weatherford. We drove back  in February for the closing on the house and moved to Alamogordo March 15, 2012.

About ten days after moving in, Doug decided to connect the water to the inside refrigerator so we can enjoy cold water and ice. On the back wall of the garage is a tree of copper pipes that he worked from. Later that evening I went out to the backyard and noticed water running down the side of the house. I immediately told Doug and he says, "I hear water dripping in the bedroom." I ran in and began moving photos and artwork sitting on the floor around the walls waiting to be hung. I placed a waste basket under the leak and noticed an even larger leak starting over the high boy. As I returned with a pan, upon entering the bedroom, I heard a strange noise and jumped back into the hallway just in time to avoid a 4 x 6 piece of sheet rock coming down. There was also gobs of wet insulation slung everywhere. I told someone later that it looked like an elephant had come to visit with a very bad case of diarrhea. Doug turned the water off and went up a ladder to figure out where the water was coming from. One of those copper pipes had once been connected to a swamp cooler and when they disconnected it, they simply crimped it. The stop valve on the pipe in the garage area had been left partially open and this led to the flood.

We spent the next 19 days in the Super 8 Motel while the insurance company and contractors put the house back together again. More later...