My husband and photographer, Douglas Kerr, sat on our couch in the living room and shot pictures of local hummingbirds feeding and flying around our patio. We have each experienced them flying about our heads as we filled the bird bath or did other chores on the patio. One day when I went out the patio door, I spied a hummer sitting on the bird feeder with his head down, sound asleep. Guess he got too full to fly. Unfortunately, he heard me and flew away before a camera could be located.

We had a terrible time with bees and they ran the hummers off. I found the yellow inserts you see on the feeder that block the bees. Also, these teeny-tiny ants came out of nowhere and, although you can't see it here, we found something on the Internet that blocks the ants because of an odor the ants don't like at all. It simply hangs above the feeder and the feeder hangs on it. Our hummers are happy and have returned in force.

Thanks, Doug, for the wonderful photos.

This is all I have to say for now.
Posted by C C Crittenden at 10:48 AM No comments:

Members of New Mexico Roadrunner Chapter of the Red Hat Society got together at Rosa's home for a potluck luncheon and to decorate a huge hat and individual aprons in anticipation of the Alamogordo Christmas Parade in December. Since it is fairly hot in August, we decided this would be a good project to do in air conditioned comfort.

Queen Ladybird (Carla) created the base for the hat ahead of time and several created filler for the rest of the decoration from sinsimay netting in red and purple. The red Christmas aprons were quite plain, but they were soon sparkling and glittering with the addition of gems, sparkles and various other items. We are learning to be creative with the addition of lights to everything since this parade is in the evening.

Our hostess, Rosa, made a delicious spaghetti sauce and pasta. Others brought salads, desserts and garlic bread. The meal was topped off with Italian Ice in lemon and strawberry flavors.

We welcomed a new member to our group, Cyprina Madrid, who is also a semi-finalist in the Alamogordo Idol Contest being held at the Flickinger Theater in September. Cyprina is an Air Force veteran, mother and grandmother and we are delighted to have her as a member of our chapter in the Red Hat Society.

Get well cards were signed by all and sent to our Vice Queen Penny who underwent recent surgery and to Queen Mabel in Tularosa, New Mexico who has been ill also. A birthday card was signed by everyone and sent to Donna, a new member of our chapter who had a previous commitment. Members played Happy Birthday on their kuzoos to Queen Ladybird and Cyprina sang "Happy Birthday" treating us to her lovely voice.

The Flying Purple People Eater Award was sent home with Esperanza because she seems to stay later at the events helping our hostess Rosa clean up.

As you will note there are no photos of Queen Ladybird because I was the photographer among other things and just lost my place. In fact, two members didn't get in the pictures for one reason or another. I apologize to Lu and Dorothy for the oversight.

This is all I have to say for now.
Posted by C C Crittenden at 12:38 PM No comments:

Members of the Democratic Party of Otero County volunteer manning the booth at the county fair to let people know we are alive and well and ready to register voters regardless of their political persuasion. It is so important for everyone to exercise their right to vote. It has been this writer's experience that things not used tend to lapse or completely disappear. The right to vote is a vital part of our Democracy and we need to keep it this way.

It is always a fun time in a booth at the fair. One sees people they know and meet many new people which is always interesting. Most people make kind remarks, but once in a while there's that one who is somewhat bombastic and my defense is simply to smile them away. We had a big wall behind us where people could write "Why I'm a Democrat" and there were some profound statements listed on this wall. This was my second year and I'm already looking forward to next year.

Linda Lopez reveals her plans to run for governor of New Mexico at the monthly meeting of the Democratic Party of Otero County (DPOC). She stated that New Mexico is number one in child hunger and number two in senior hunger. She hopes to change this by concentrating on whatever it takes to eradicate this sad situation.

She said Martinez is trying to block the Affordable Care Act. "There are roadblocks going up," she said.

Lopez ran for lieutenant governor in the last election. She currently serves as a state senator representing Albuquerque. She has served in this capacity for the past 17 years. She  co-chairs the Interim Legislative Ethics Committee and serves as a member on three others.

She says she is a good fit to take on Martinez, "Hispana to Hispana,"  as she puts it. Lopez is a Hispanic woman so Martinez won't be able to claim, "Oh, poor me. I'm a woman and they are picking on me."

It was a long meeting because we were blessed with several speakers including Nate Cote who gave an update on happenings in Chapparal; Cornelia Lang giving an update on the campaign of Leslie Singh who is running against Steve Pearce; Stephanie DuBois speaking about the annual Labor Breakfast; Nola Jones Scholarship winners Michelle Blumenthal and Shara Shinabery with the latter reading the essay she submitted. Many of us enjoyed the good food at Sunset Run Restaurant before the meeting.

Senator Lopez speaks well, is impressive, has a great resume, is a single mom who struggled to get her education and works for the good of the people. We wish her well in her campaign.

Thanks Doug for the great pictures.

This is all I have to say for now.
Posted by C C Crittenden at 1:15 PM No comments:

What a fabulous Saturday, August 10, 2013 turned out to be. Between Facebook and regular emails, I received over 250 greetings and cards as well as many by snail mail. One only turns 75 once in a lifetime so it was a wonderful way to celebrate with everyone else. All of my children checked in which made me deliriously happy. Also received a call from a dear friend in Germany, Ingrid.

My darling husband, Doug, drove us up the mountain to Cloudcroft to dine in The Lodge on the golf course and it was marvelous. I had rack of lamb and Doug had a New York steak. After dinner we had table-side Cherries Jubilee which was scrumptious. People even hung around to watch the creation of the dessert after they had dined. The ambiance of the beautiful Rebecca Restaurant in The Lodge is superb and they add to it with a pianist playing just the right tone of background music creating the perfect scene. Incidentally, the Rebecca Restaurant has a ghost and her name is "Rebecca." The employees claim that lights get turned off at odd times, items are moved around, doors open and close for no apparent reason and sudden wafts of air occur where there is no air conditioning. We were not privileged by a visit from Rebecca, but we hope to return soon and perhaps she will favor us.

On the way to our table, we spotted our lovely Mayor Susie Galea and her handsome husband, Jay. They were celebrating their 13th wedding anniversary. We greeted each other and discussed our mutual celebrations.


I must tell you we ate every tasty bite of this dessert and I do believe I could have eaten even more.

Thanks to everyone for making this special birthday even more so with all the greetings, cards, calls and gifts.

Doug and I attended another "Absurd Theater" production at the Old Mill in Ruidoso, New Mexico titled "Spuds McGuffin Vanishes" written and directed by Blake Martin of Alto, New Mexico. McGuffin can be explained in several different ways. It's kind of something that has no purpose and so doesn't exist, yet drives the plot forward. The production is a concert by the band "Spatula" in conjunction with a surreal romantic comedy of pseudo-couples. The audience is called on at various times to do their part in this absurd theater and it is unadulterated fun for everyone.

Spatula band members are: Pete Davis on drums, Rich Chorné on guitar/flute/harmonica, Tim McCasland on dobro/banjo, and Deanna and Blake Martin play percussion and bass. Their music is a mix of reggae, rhythm and blues and rock and roll.

This event takes place in the Village of Sawtooth Mountain where Penelope Coco has been sentenced to be executed for high treason. MorindaBombinda has devised a scheme to save Yum-Yum's sister from certain demise. Meanwhile, despite the efforts of the Fabulous Bambee, true love does prevail in the face of all adversity. In the grand finale, the Fabulous Bambee is torn apart for the Great Dance of ceremonial Posh and Circumstance. This, in true Sawtooth Mountain tradition, is in anticipation of the Weddings at Dawn. Hopefully the pictures will help the reader understand the story. 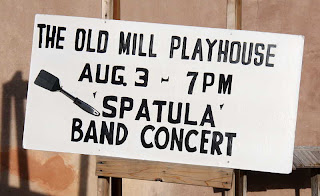 Information on Blake Martin's productions are almost always in Vamanos on Fridays in the Alamogordo Daily News so be on the lookout for the next one which could be the first weekend in September. Fabulous entertainment and well worth the drive to Ruidoso, New Mexico.

Thanks Doug for taking such great pictures.

This is all I have to say for now.
Posted by C C Crittenden at 1:13 PM No comments: