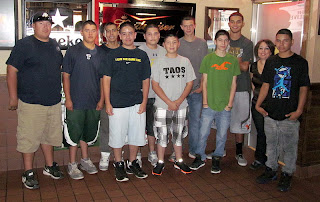 Posted by C C Crittenden at 8:14 PM No comments:

I received a phone call from our good friend, Tommye Tonips, in which she related that she would be manning a booth at the Indian Market, probably for the last time because her husband, renowned sculptor, dancer, actor and painter, Gordon Tonips, direct descendent of Comanche Chiefs Warhorse and Quanah Parker (both Quahadi Chiefs) and Kiowa Chief Stumbling Bear (Medicine Lodge, Signer), had died. We own three of his sculptures and they are stunningly beautiful works of art.

We immediately make plans to go, but due to the lateness we are forced to find lodging in Taos. There just was no "room in the inn" so to speak. If you have never gone to the Indian Market which has been in existence for 91 years, you need to put it on your bucket list. There is truly no way to describe the gathering of Indians from all over the United States displaying their creations. Each one is more exquisite than the last as one walks along taking in the sights and sounds. It is surely a treat just watching the people, many of whom are walking works of art themselves. I must warn you to reserve a room early and plan to visit the market several times, taking siestas as time allows, or you'll never get through the whole thing. There were 1100 exhibitors this year and we only got through maybe one-third of them. It was indeed a marvelous experience and we hope to return next year and take in more of the exhibits or at least see some of those we missed this year.

Not having all the information, we arrive on Friday to rows of empty booths. As we were driving along the highway, I had told Doug since I didn't have Tommye's booth number we would probably just walk up and see her almost immediately. We discover that the market really doesn't start until 9:00 a.m. on Saturday morning, but decide to do a little exploring and Doug wanted to take pictures of the set up before the crowd arrived on Saturday anyway. As we are walking along, I look over at a pick up truck and some people setting up tables in a booth. Believe it or not, it is Tommye and her friends! We had a grand reunion not having seen her since the Fort Worth, Texas Stock Show and Rodeo.

After eating lunch, I went to wash my hands and left a beautiful ring on the sink. As we walked down the street, I suddenly missed it and we rushed back to hopefully retrieve it. It was gone. As I was looking for someone to ask about it, a lovely lady stood up at her table and said, "I gave your ring to the hostess since you had left." Doug took this shot as I came out holding up my hand to show I got my ring back.

I do some volunteer work with the Cancer Resource Center here in Alamogordo and when I mentioned that we were going to the Indian Market, another volunteer, Diana Hamilton, told me about Lindsey and gave me her booth number. I made sure to look her up. She makes beautiful dolls and takes great photographs. Her Indian heritage is Mescalero Apache, Comanche, Kiowa Apache and Northern Arapaho and she lives in Mescalero, New Mexico just a few miles from Alamogordo.

Jaque, a young artist from Jemez Pueblo, did this live spray-painting demonstration on an exterior wall of the New Mexico Museum of Art. With his ladder separating him from the crowd, he didn't seem to notice people stopping every minute or so to snap pictures of his progress. Not all marketgoers enjoyed Fragua's work. One man asked him to stop because of the smell. Fragua just shrugged it off saying, "It's very scary for people. They don't understand it."

By 11:00 a.m. the swaths of color were beginning to form a pueblo landscape on his canvas. As more people stopped to watch the process, Fragua said they were responding to the energy of his work. "I'm trying to find some sacred energy in this space that's so commercial," he said.

Beals and Abbate Fine Art Sponsored Fragua's painting as well as other creations around town, all for the sake of adding something new to Indian Market according to curator Jacob Martinez.

Thanks to Doug for the great photography.