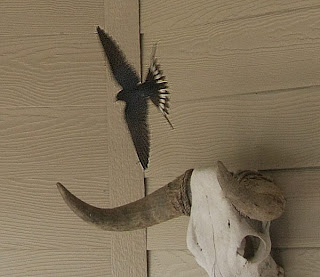 Before I forget it again, for those of you not very familiar with blogs, if you click on a photo it will become larger on another screen for easier viewing and you can just hit the back button when you want to return to the blog.

The swallows are all doing well with the one baby still in the nest, but he'll soon join the rest. We had a little rain shower this week and they all flew back to roost on the patio until it was over. When the sun came out they all began to put on an aerial show in the backyard. They were soaring high and swooping low while chasing each other. Our dog, Daisy, was diligently searching for a place to hide until the birds settled down. Apparently all the swooping and diving disturbs her.

The Wild West Women of Weatherford Red Hat Chapter gathered at our Queen's ranch for lunch and band practice. Queen Gabigail has a room over her garage that is the Red Hat gathering room for planning events, luncheons and arts and crafts get-togethers. We are presenting a redneck charity fundraiser event for July 24th at Couts Methodist Church Gym. It is a costume event in that people are asked to come dressed redneck or in Red Hat regalia. We have formed the Red Hat Redneck Band and will be playing and singing some well known songs with Red Hat words. We have an entertainer booked, Cuzzin Jelvis, who advertises himself as the Elvis' sixth cousin once removed who sings Elvis songs and uses the Karaoke machine as well. We have many other redneck plans for this event and the recipient of a portion of the funds is Freedom House, a refuge for battered spouses and their children. Stay tuned.

On Friday, June 25th, eighteen members of PCWNC drove to Sue Coleman's home to enjoy a covered dish luncheon and Game Daze. Each month someone in the club hosts this event where we get together and play different games. We played Canasta, Skip-Bo and Polish Rummy, did a lot of conversing and dining. These activities are surely helpful in keeping our minds supple and the gears turning besides just being a ton of fun. 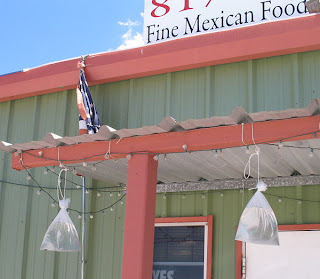 We met Russ and Kelley at La Choza (The Shack) Mexican Restaurant on Highway 730 in Azle, Texas for lunch on Saturday, June 26th. As we were entering the front door, we noticed plastic bags filled with water with a couple of copper pennies in each hanging from the roof of the entrance. We, of course, asked what these were for. It seems these scare flies away, but no one seems to know exactly why. See photo.

Doug ordered chile relleno and I ordered chicken enchiladas. Russ and Kelley had chicken fajitas. The food was absolutely delicious as always. We caught up with ongoing events in the family, one of which was that Russ was T-boned in an intersection in his truck. We are thankful he wasn't injured nor was the other guy.

Also, Russ was going though a gate to his property next door when he noticed a rustling in the leaves on the ground. When he looked down, there was a copperhead snake looking mighty angry. While Russ was looking for his hoe, the snake went back into the garage. Russ owns a pest control company so he fogged the garage, which resulted in driving the snake out. Needless to say, he did kill him. Russ did say the snake was beautifully colored and they do eat mice and rats, but having a poisonous snake that close is just too dangerous.

The flat screen TV in my office quit so when we got home from lunch, Doug took the TV apart and determined it needed some new capacitors. He drove to Radio Shack where he found exactly what he needed, came home and began the repair. My TV is now working like new for $6.00 worth of capacitors and Doug's labor as opposed to $250 for a new TV. That man of mine is truly a genius and if it can be repaired, he's the one to do it. I am truly grateful for him in my life.

I continue to write about the Cherokee Indians and research as I go along. Have decided to use two of my granddaughters as critics when I get to a good point. They are both avid readers and I know they will give me an honest opinion as to whether I'm on the right track with this book for children their ages.

In the meantime, I've read "Grace & Gumption", edited by Katie Sherrod, our book club choice for June. It is the size of a coffee table book and reads like a coffee table book. This is a compilation of stories about Fort Worth women (mostly club women) written by a number of writers. They all run together with not much changed but the names of the women being written about. I was disappointed not to learn more about these Fort Worth women personally. The writers concentrate on the women's club activities and offices held. I actually began to skip-read after the first half. It was just too boring for me.