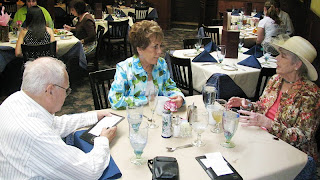 Yesterday. June 4, 2010 Doug and I met our friends from Arlington, Texas, Sally and Ted Dysart for lunch in a darling restaurant called Bistro Louise. Louise is a cute tiny French woman who is a fabulous gourmet cook in the Mediterranean style. We all chose vegetable lasagna along with various salads and it was exquisite. I highly recommend Bistro Louise.

Sally and Ted are two quite fascinating people. Sally is originally from Mexico and was employed by the Dallas Independent School District in Dallas, Texas for many years, now retired. Ted was born in Cuba of Scottish parents. Both of them have marvelous stories to relate and it's never boring in their company. 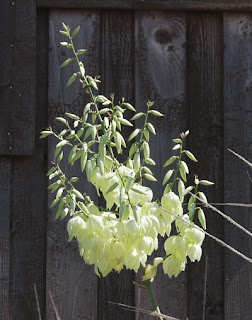 Today, June 5, 2010, Doug and I discussed the over abundance of the yucca plant in our area and the fact that we've never seen so many blooming at once. Evidently, the heavy rain we had this year caused them to blossom profusely. We drove down Azle Highway 730 until we came to a field of the lovely plants and Doug took photos to share with you. 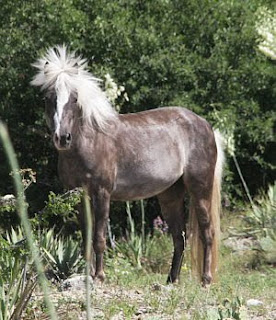 In the field of yuccas was a darling little pony who was having a bad hair day and I just loved the way she looked so Doug took a photo of her as well.

If you are not familiar with this plant, there is much information about it on the Internet. There are around 40 species of yucca, but the one most prevalent here in North Texas is the yucca glauca. The yucca plant has long fibrous stalks at the tips of which its pale cream-colored flowers bloom during late spring and early summer. The flower clusters are up to 6 feet long. The plant has wide leaves with sharp edges at its base. Some yucca plants can reach the height of a small tree.

The yucca has a symbiotic relationship with the yucca moth. Each spring, male and female yucca moths emerge from their underground homes and fly to the nearest yucca plants. The pregnant female collects pollen grains within the yucca flowers and assembles them into a pollen mass which she tucks under her chin. She then crawls into flower and lays a single egg into the ovule chamber. After this, the female moth, still carrying the pollen mass, climbs to the top of the ovary and puts the pollen into the flowr stigma by moving her sensory organs back and forth above it. This pollinates the flower in which she has inserted her egg. The germination of the pollen sends many sperm-bearing tubes inside the flower ovary which fertilize hundreds of immature seeds.

This not only insures the perpetuity of the yucca flower but, the relationship is equally vital to the yucca moth. The moth larva hatches within the developing flower ovary and starts feeding on the maturing seeds. This is an important stage in the life cycle of the moth as it later develops from the larva; in the fall the larva comes out of the capsule and lowers itself to the ground where it burrows into the soil and assembles a cocoon. It hibernates over winter and emerges in spring as an adult moth, thus starting the whole cycle all over.

The yucca glauca is the state flower of New Mexico. It is sometimes called Spanish bayonet for its long sharp leaves. Other nicknames are beargrass and soapgrass. Yuccas are native to the West Indies and the word yucca comes from the island of Haiti. 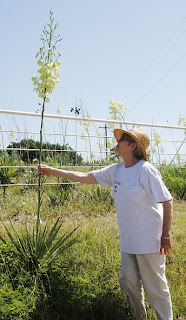 The yucca has a long history of use as a folk remedy employed for treatment of arthritis and rheumatism and is cultivated as an important medicine plant and staple food in South America. Native Americans used the soapy leaves as poultices or for baths for skin sores and sprains as well as to treat burns and abrasions. It has been reported that Native Americans washed their hair with yucca to fight dandruff and hair loss. The stalk, root and leaves are commonly used to make medicines.

I must thank my darling husband, Doug, for all his photography work in my behalf.

Thanks also in order to Sherry Dell, Claire Jeffreys and Kimberly Johnson for their contributions on the Internet to this information on the yucca plant.