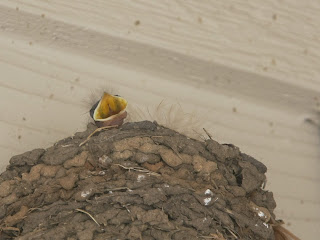 June 10, 2010
The birds continue to progress as you can see in the photos. We discovered there are six, not five as we first counted. The way we take the photos is that Doug has our Canon SX110 camera mounted on a monopod. This is connected to a laptop computer. He hoists the camera up over the nest and I push the space bar on the computer to take the photo. The parent birds are still not too accepting, but not quite as fierce towards us as they were at first. In this first photo, the little guy looks like he's saying, "Feed me! Feed me!" Stay tuned. 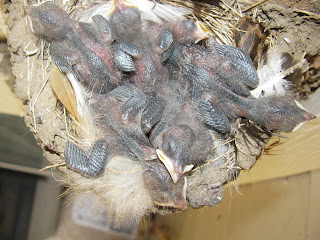 I attended the PCWNC Book Club here in Weatherford, which met in Loretta Hale's home at 1:00 o'clock this afternoon. We read "My Life in France" by Julia Child this past month and had quite a lively discussion today. Some were of the opinion that she didn't reveal much of herself in her book and the French expressions, of which there were many, were somewhat distracting if one doesn't speak French. Ms. Child rarely interprets for the reader. There were certainly areas that were exciting, but one can only read about gourmet dinners and wines with each course so many times before getting bored. Our new assignment is to read "Grace and Gumption" by Katie Sherrod, a book about Fort Worth women.

This is all I have to say for now.
Posted by C C Crittenden at 8:47 PM