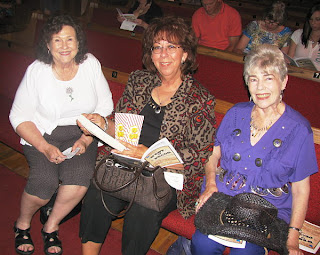 Sunday, June 20, 2010
Doug and I were treated to tickets for the production of "West of the Pecos" by good friend, Barbara Farley on Saturday, June 19th for our recent anniversary. The play takes place in the Theater off the Square on North Denton Street in Weatherford, formerly a church building. It had a huge cast and was wonderful entertainment. We plan to buy season tickets so we won't miss any of their productions. In the photo are, Barbara, her friend, Jo Ann (who just happens to be a card carrying Chickasaw Indian) and Carla. 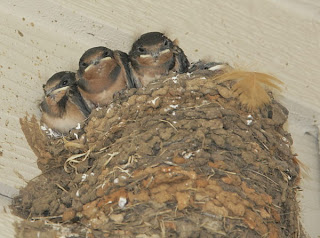 The swallows are truly beginning to look like their parents now. It's difficult to get a shot of all six at one time, but the three above are just adorable. In the second photo, notice the little one in the middle looks much younger than the others. He was the last one to hatch so will probably be the last one to fly. Also, in the photo is one with his back end hovering over the edge of the nest. At a very early age, the parents teach them to back up to the edge and send their excrement below. I go out every day and put fresh newsprint down to protect the patio floor from stain. 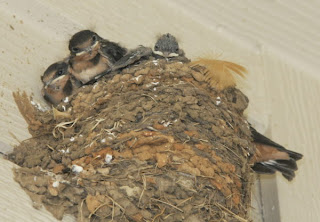 Ten of us gathered at the Cracker Barrel Restaurant in Benbrook, Texas for brunch today to celebrate Father's Day. Feted were my son Russ , Doug and grandson expectant father of twins, Taylor. The place was packed and we had to wait about 30 minutes, but they have an interesting store adjoining and we passed the time browsing. After we had an excellent meal, gifts and cards were opened. I couldn't find a card for an expectant father so I improvised with one in Spanish (knowing none of us could interpret) and wrote on the card that the lady at the card shop explained that this is what Taylor will be doing when the twins are born. He definitely will get that card translated! The first photo below is of Jennifer (obviously expectant), Carla and Taylor. His mother, Kelley, has her back to the camera. In the second photo, we all left the restaurant and went to Russ & Kelley's to see the improvements on their ranch and I am petting Two Socks with the other horse, Shadow in the background. 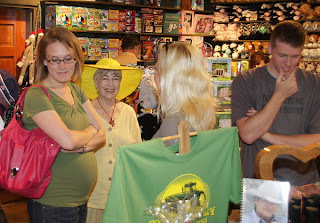 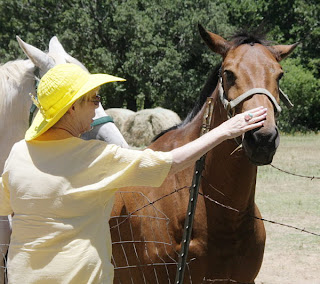 This is all I have to say for now.
Posted by C C Crittenden at 1:29 PM