Had an appointment with my eye doctor today to check my left eye for the second time after having cataract surgery. My eye is so well that I can wear eye makeup again until I go to have my right eye done on June 16th. Being able to wear eye makeup means a lot to me. 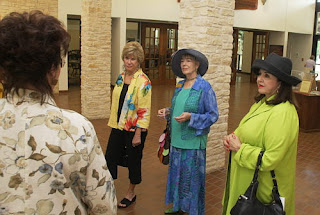 This afternoon, Doug and I went to the Doss Heritage Center (a lovely history museum here in Weatherford) to meet Jamie Bodiford. She is the facilitator of Discover Parker County, an activity of PCWNC. Today we went through the Parker County Sheriff's Posse Historical Exhibit. This group was formed in 1947 and I get the idea that belonging to it is quite prestigious. They have a rodeo every year and this exhibit is a forerunner to the rodeo.

Carol, the docent, also related the story of the chuckwagon in early-day Texas. The first chuckwagon was developed by cowboys working for Col. Charles Goodnight, co-founder of the Goodnight-Loving cattle trail. Cattle drives were started up the Chisholm trail in 1867 with over nine million head of cattle driven from Texas to points north. Cowboys were scarce and Goodnight decided he'd have a hiring advantage by serving quality meals along the trail. Remember that old adage - The way to a man's heart is through his stomach. So, what he really needed was a good cook and a mobile kitchen. 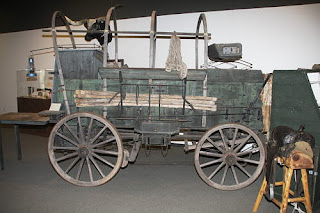 Goodnight purchased a Studebaker war-surplus munitions wagon. He outfitted the wagon with a kitchen on the back and, with the help of his cook, developed an efficient layout that was soon adopted by trail drovers across the west. It was soon realized that the wagon was much too long and heavy. It also carried munitions and about 2,700 pounds of food supplies. As a result, it was killing the animals pulling it. You will note in the photo here that this is a short chuckwagon. They built a shorter chuckwagon and used another wagon behind it to carry munitions, bedrolls and tools. This was a more satisfactory arrangement for the oxen or mules to last through a cattle drive of 1,000 miles.

Many behavioral rules were in place for the cowhands and woe to the one who broke a rule. He didn't eat. Most of the rules were just common sense and courtesy. The cook ruled and the wagon boss even stepped gingerly around him.

They have several ongoing exhibits and I highly recommend visiting the Doss. If you don't live in Weatherford, but happen to be driving through, make a point to visit this fine museum. You'll learn a lot about the history of Parker County and the West.

As it was already 3:30 p.m. and Doug and I hadn't eaten lunch, we decided to dine out. We went to a great restaurant called Booray's in Hudson Oaks. They primarily serve Cajun food and it's always delicious.

We came home long enough to catch the news on TV and headed out again to the Galbraith/Pickard Funeral Home for visitation for Laverne Pritchard. She had a bad fall in her back yard which she didn't recover from. She was a nice lady who had a lifelong love of politics and worked very hard for her favorite candidates. Rest in peace, my friend.

This is all I have to say for now.
Posted by C C Crittenden at 4:54 PM