Prior to this event, Carla wrote and  received a proclamation from Mayor Susie Galea of Alamogordo, New Mexico and also one from Governor Susana Martinez celebrating the RHS 15th Anniversary. These were presented to the RHS at the convention by Carla. Mayor Galea also appointed Carla as emissary from Alamogordo to the convention.

Along with the regular members of the chapter, one new member was welcomed, Lu Mattson. Our chapter now numbers 19 and growing. 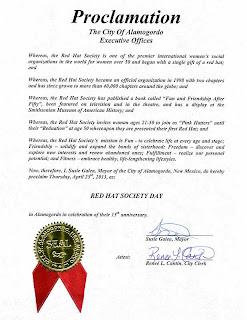 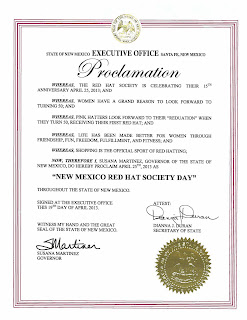 If you click on any image, it will enlarge it enough to read or see the photos better.

Super Red Hat hugs to Vice Queen Penny for organizing and handling the 15th Anniversary event in my absence. Thanks also for the great photos at Memories Restaurant. I really missed being with all of you.