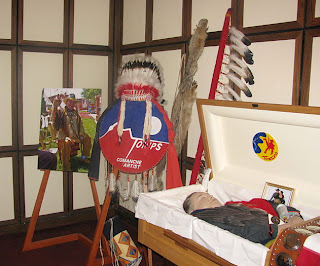 It is with a heavy heart that I post my blog tonight. Our dear friend, Gordon Tonips, has left us to be with the Great Spirit. Gordon was a direct descendent of Comanche Chiefs: Warhorse (Quahadi Chief) and Quanah Parker (Quahadi Chief); also of Kiowa Chief Stumbling Bear (Medicine Lodge, Signer).

He had his 61 birthday in the hospital in Fort Worth, Texas. Gordon was born in Arkansas City, Kansas. He was constantly around his grandmother who worked in the Chilocco Indian School in northern Oklahoma. He spent much of his time in the Art Department drawing, painting and sculpting while being immersed in Indian culture. He proudly served in the Air Force from 1969-1971, where his duty was officially in supply, but he actually assisted the local General with all the needed artwork at the time.

Gordon met and married Tomazane (Tommye) Rains of Benbrook in 1973. After a few years working for the city of Fort Worth in the Planning Department, he struck out on his own. He and Tommye opened a small printing company on the East side of Fort Worth called Wampum Graphics, where he was heard to say, "There is no money in it, but we are happy." After 19 years in the printing business, his Indian roots called to him so strongly that he began to explore his sculpting talent full-time. In an interview he said, "When I began to explore my talent in native art, I was encouraged by the Comanche artist and flutist, Doc. Tate Navaquaya who guided me to follow my dreams when he told me, 'If you want happiness, look in your own backyard.'

"Thus, I discovered these beautiful sandstone boulders and to my surprise they spoke to me with images of the ancient past. When I sculpt a stone, I travel into the past a thousand years and re-live the daily lives of the great people who built and lived in these sacred places."

Gordon and Tommye have two extraordinary children who are the light of their lives and they have their wonderful spouses and children whom he loved and was so very proud of. For the past fifteen years he was an award winning sculptor, painter, dancer, story teller and living history reenactor.

We first met Gordon at an Indian event in Grand Prairie and my first impression of him was that he exuded kindness and when I shook hands with him, I was reminded by the softness of his hand that he was indeed an artisan. We now own three of his sculptures, one is Texas Sandstone and is titled "The Water Jar"; another is a pale pink color and is titled "Baking Day" and the other is representative of the Anasazi area of the Four Corners area in variegated pinks and browns of a cliff dwelling titled "Puyé".

Not long ago, Doug and I met Gordon and Tommye for lunch and after lunch he gave me two eagle feathers from his personal eagle. I was humbled by this grand gesture and extremely grateful that he thought me deserving of these eagle feathers. We loved this beautiful, talented man and the world is deprived by his departure. As I am Cherokee, I will simply say in my language "donadagohvi" (til we meet again).