We actually drove to New Orleans on Wednesday, August 17, 2011 which took us about 10 hours with Doug and I splitting the driving. When we arrive at the beautiful New Orleans Riverside Hilton Hotel, there is a mix-up in our hotel reservations so we are given a beautiful suite with, of all things, a Murphy bed and a lovely view of the mighty Mississippi River. We unpack and fall into bed; I mean this literally because the bed is flat on the floor! That 10 hour drive did us in. 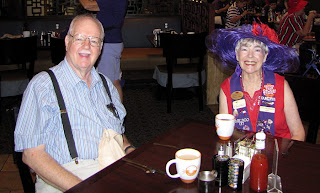 Doug and I at the hotel coffee shop

Thursday morning we make our way down to the hotel coffee shop where we experience sticker shock at the prices of breakfast; even something simple like cereal is $7 to $9. We eat breakfast there, but vow to find something more reasonable for the rest of the week. I have a tour that is to take me to The New Orleans School of Cooking. When I go to the designated place to catch a bus, I am told that since there are only two of us going at this time, we can just walk there. I don't know who the second woman is, so I catch a cab which is quite reasonable. I thought I would be cooking, but this school is set up like a restaurant and the chef stands at the front with tilted mirrors above and behind her so attendees may view her as she prepares the dishes. I regret I did not get her name, but she was marvelous and had a running commentary about New Orleans and all the past inhabitants from various countries who helped form this fabulous city into what it is presently. 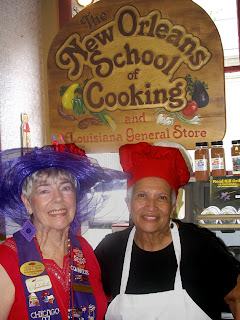 Here I am with this fabulous chef wearing my Red Hat chef's hat.

We are first presented with what she calls a lagniappe, some lovely breads with dipping sauce. Our next course is corn & crab bisque and it is absolutely fabulous. Then we enjoy shrimp creole, an exquisite mixture of shrimp, rice, onions, celery, green pepper, green onions with tomatoes and plenty of "Joe's Seasoning" among other spices and ingredients. Just when we think we've died and gone to culinary heaven, she takes the bread pudding out of the oven which is like no other bread pudding ever tasted. It contains a whole bottle and then some of Pina Colada mix and is covered with whiskey sauce. The final pièce de resistance results in something that derives their name from Marshal Luplesis-Praslin (1598-1695) and his butler's recipe for almonds coated in sugar, used as a digestive aid. When Louisiana was settled by French colonists, native pecans were substituted for almonds and thus, we have the praline. I've never tasted a praline as delicious as this one!

It was a grand gastronomic experience and I highly recommend The New Orleans School of Cooking at 524 St. Louis Street, New Orleans, Louisiana. I am told that people who want to attend make reservations a year in advance and you can call them at 800-237-4841 or go to their web site nosoc.com. 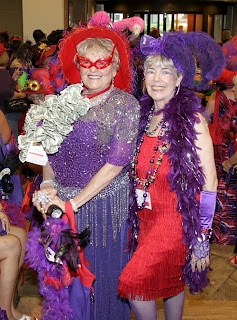 Queen of Gaudy, Gail Box aka Midam Moola and Carla as a flapper.
My colors are reversed because August is my birthday month.

The event for the early arrivals occurs on Thursday evening where we all board buses bound for Mardi Gras World. Many of us are in costume and wearing masks. With Red Hatters, one never knows what to expect, but imagination and fun abounds. We are escorted through this huge building housing float after float being worked on for the next Mardi Gras. Eventually we are ushered into a huge dining area for a dinner of jambalaya and other Louisiana delicacies. Exalted Queen Mother Sue Ellen Cooper and Vice Queen Linda Murphy even circled the room a couple of times in their very own Mardi Gras float led by a motorcycle cop. We were all trying to catch the beads they threw. 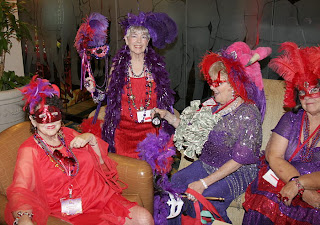 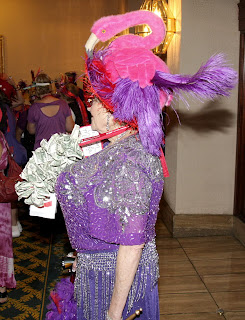 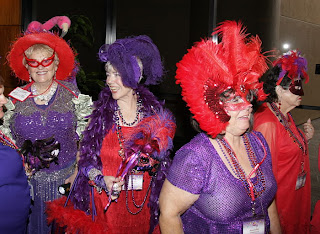 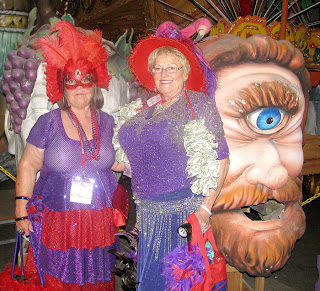 Anna and Gail in front of a float 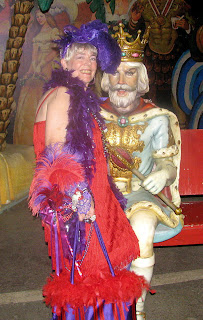 The King and I getting acquainted!

On Friday, August 19, 2011 we all headed for the buses to take a tour of New Orleans. Our tour guide is a lovely lady who is very knowledgeable in the history of the city. 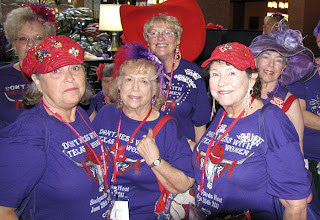 Front l to r: Anna, Toni and Barbara
Back l to r: Pat, Gail and Carla 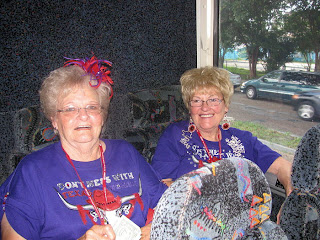 Pat and Queen Gail (her hat is Texas large so it's
stored in the overhead bin!) 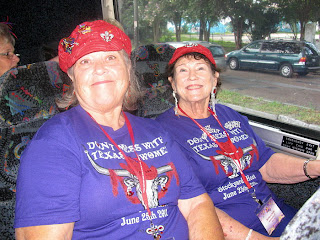 Anna and Barbara enjoying the ride 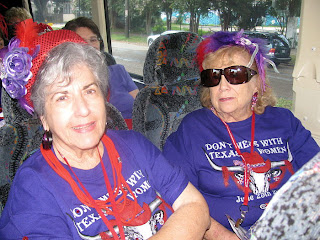 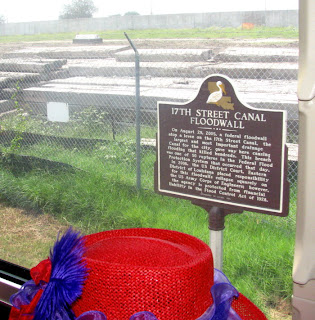 Commemorative plaque where the flood wall
broke after Hurricane Katrina 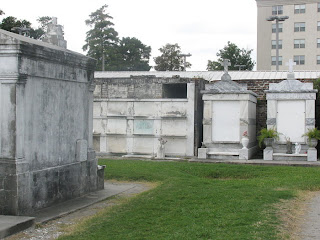 This is one of the above ground cemeteries and
looking along the back wall where you can see
an empty space is where people are buried who
can't afford the expensive marble crypts. 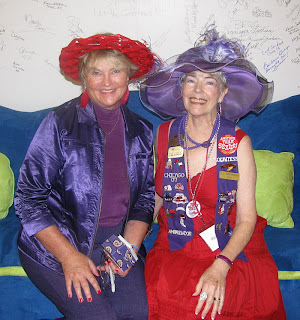 This lovely lady beside me is Grandma Luge,
an Olympic Champion and booster of
Tena products for incontinence.

This is my attire for
the Friday night event
and Doug shot this in
our room. 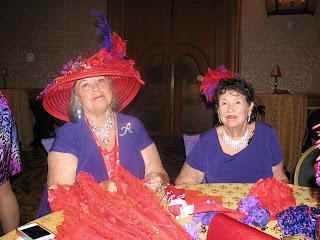 Don't Anna and Barbara look wonderful
all glitzed up! 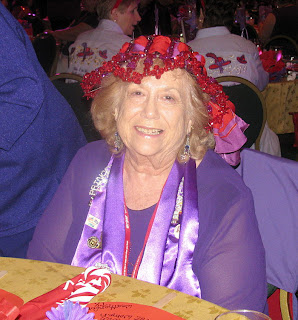 This is Toni in her hat creation and the
lovely pin scarf Kay made for each of us. 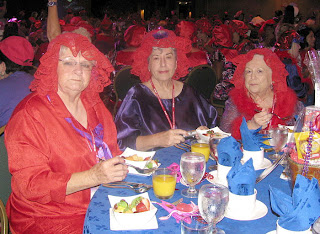 Saturday morning was the Pajama Breakfast and
here, Pat, Kay and Toni are wearing the
gorgeous bed caps that Kay made. 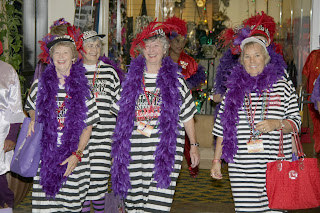 These ladies all dressed in prison stripe gowns
and said they had to escape from prison to get
some decent food.

Doug took this shot
just before I went
down to the Pajama
Breakfast. 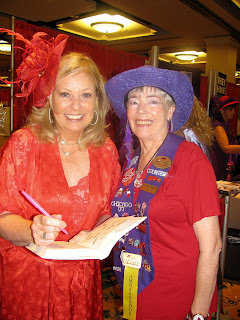 Speaker at the Pajama Breakfast was
Tina Sloan, The Guiding Light soap
star. Here she signs a copy of her book,
"Changing Shoes" for me in the
Hat District after breakfast. 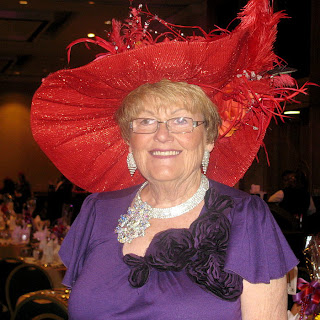 Queen Gail all ready in her beautiful dress and hat
with plenty of sparkle to match!

Barbara all decked
out wearing her own
red hat creation! 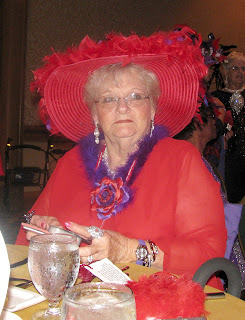 Pat, our lady who loves to gamble and
I believe she took home some moola
from Harrah's! 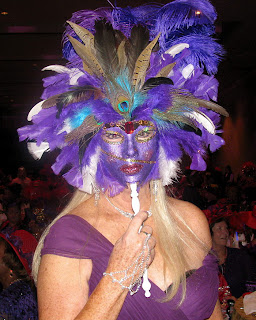 This is Linda with the beautiful mask
she created for the contest and then
forgot to enter it!

Again, Doug shot this
in the room just before
the Saturday event. 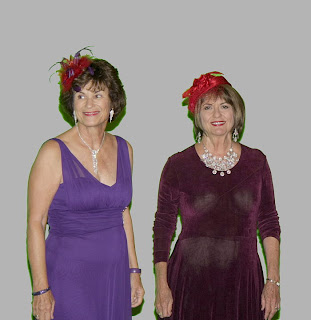 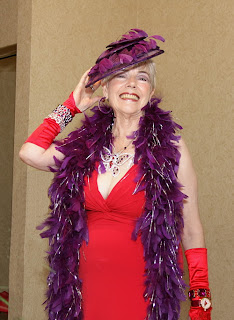 This is just a fun shot! 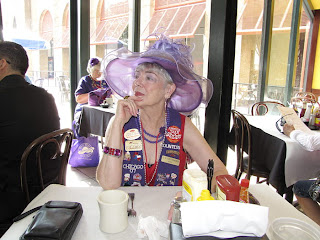 Back at our sports bar/coffee shop on Sunday
before heading back to Weatherford, Texas.

It was indeed a fabulous convention and we so enjoyed meeting all our sisters from around the world. I believe the tally was something over 1700 of us and we're already looking forward to next year in Las Vegas, Nevada in the Paris Hotel on June 28-July 1, 2012. See you there!