The Book Club of the Parker County Women's and Newcomers' Club along with some guests got together to attend the local showing of "The Help" at the City Lights Movie Theater. We read the book some time ago and we were not disappointed in this movie. It superbly followed the book and the actors were perfect in their roles.

After the movie, we drove to Boo-Ray's of New Orleans Restaurant for dinner. They specialize in Cajun food and everyone seemed to enjoy their entrees. 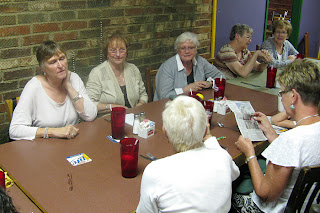 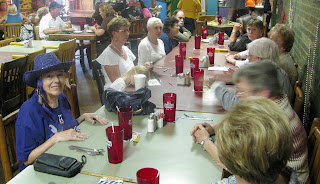 The three photos above are of all the gang at Boo-Ray's and it is just difficult to name everyone. But, you can see we are having a great time. Opal Dale, newly moved to Weatherford, Texas from Mississippi (she was affected by Hurricane Katrina) made the event even more interesting by bringing newspaper articles a friend mailed to her about actors in the production. There was a set of twin girls who played the part of the little girl and there was an extensive write-up on them. She also has the recipe for the Chocolate S--- Pie that is so famous in the movie. We were thoroughly entertained by this lagniappe provided by Opal.

Fifteen Red Hatters gathered at the IHOP in Weatherford, Texas for a Pajama Breakfast, one of our favorite events. As you will see in the photos, some embrace it whole-heartedly and others just show up. Of course, since it is a week day, some do work and can't wear pajamas to a breakfast. All of us who attended the International Red Hat Convention in New Orleans were eager to talk of our experiences and fun. As it turns out, I'm the only August birthday in the chapter so I was treated to a huge dessert, which I gladly shared with the rest of my sisters.

Wedding Shower for Marcia Williams. She will wed Troy Fern on Saturday, October 8, 2011.

Marcia is my ex granddaughter-in-law and she is the mother of my two great granddaughters, Taylor Anne and Tawni Alexis. Marcia's good friend, Teresa Reyes hostessed the shower in Marcia's cousin's home, Nicole.

The games were fun and quite different. Things change so much from when I was their age, but it's good to be exposed new ideas and customs. Then it was time for Marcia to open her gifts.


The food was delicious and filling and I need to get the recipe for that luscious cake. We all had a great time playing games and visiting. Can't wait for the big day for this lovely family.

This is all I have to say for now.
Posted by C C Crittenden at 6:19 PM