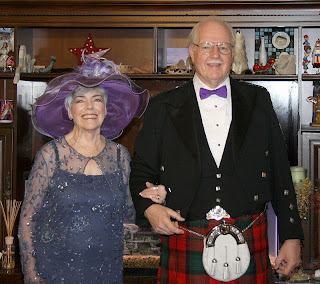 Saturday, May 14, 2011
The big day finally arrived. I rose very early in the a.m. and drove to my hairdresser to have my hair coiffed. As I was returning home, I stopped at the light at Santa Fe and Jack Borden Drive mainly because all of the cars turning right seemed to be slowing down a lot. Out of the corner of my eye I notice a Sheriff's station wagon, all lights flashing turning right from Santa Fe onto Jack Borden. He is traveling very slowly and all I can see are four animal feet walking beside the wagon which suddenly stops and around the back comes a darling little dark red pony. He trots on down Santa Fe across Jack Borden. The wagon cuts across the median to follow and by this time three police cruisers have joined in the effort to corral this little pony. I drove on, but I sure wished I'd had a video camera to catch all this on film.

I got home and made pancakes and bacon for breakfast. Rushed right out to the nail salon to get a pink fill and a pedicure. Stopped at Belk's and made an appointment with a young lady to have my make up done at 4:30 p.m. Came home and tried to catch a catnap but was really too excited to do much napping. I drove back to Belk's and the young lady did an excellent make-up job for me. By the time I returned home, Doug was completely dressed in his formal kilt looking like the handsome Scot he truly is. I was almost ready when the door bell rang and it was my son, Larry, from Fort Sill, Oklahoma (He's in the 77th U.S. Army Band) arriving to go with us to the pageant. 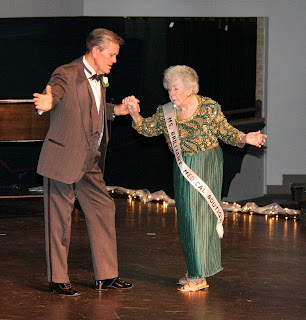 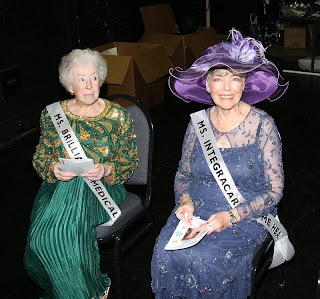 It truly was the experience of a lifetime and I had so much fun being involved in it. The winner is Carmen Ashby, 97 years young, who also won the talent competition for her rumba. I won First Runner Up and also won the evening gown competition. Carmen is of Cherokee heritage; grew up with the Cherokee language being spoken at home and she converses fluently in Cherokee. As her bio reads, she ballroom danced her way across America and Europe in her hey day. It was such a privilege getting to know her.

I was Ms. IntegraCare and Carla Virginia, Account Executive and Shelly Kinkel, RN/Branch Director (sponsors) were such fun to work with. Carla especially is a sister Cherokee born in Oklahoma so we have a lot in common. 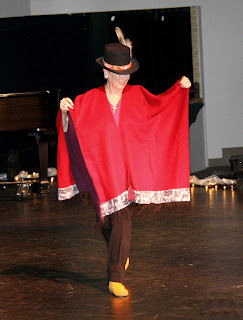 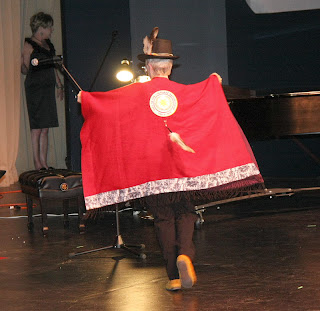 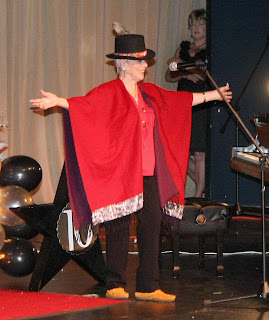 We first had the evening gown competition followed by the talent competition. I was in costume and danced the Hopi Butterfly Dance. Following intermission, 2010 Ms. Senior Parker County, Sydney Howell, came on stage and talked about her year representing Parker County. She is a truly accomplished harpist and taught harp as well as entertained at such esteemed places as Carnegie Hall. Emcee Judge Mark Riley then asked each contestant an interview question and the tallying began for picking the winners. 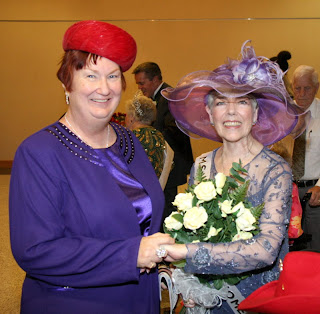 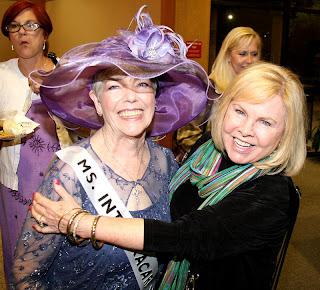 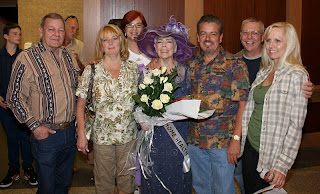 I am truly thankful for my family, my Red Hat ladies, my Parker County Women's and Newcomers' Club friends and Friends of the Library ladies who came to support me in this latest endeavor of mine. They were all cheering and clapping and it makes me feel wonderful to know I have this kind of support.

The pageant was held in the beautiful Alkek Theater at Weatherford College and the pageant directors presented a professional production and Emcee Judge Mark Riley was his usual charming self. The band "Fun Time Gang" played music we could all relate to and added something extra to the festivities. There was a reception afterwards in Texas Hall outside the theater.

I'm already thinking about my talent for next year. I have the bug now and I want to make it to the top position in this competition.

Doug took some of the photos, but he was on stage as my escort so there are some missing such as the group of winners and such. I will add these in later.

This is all I have to say for now.
Posted by C C Crittenden at 8:22 PM