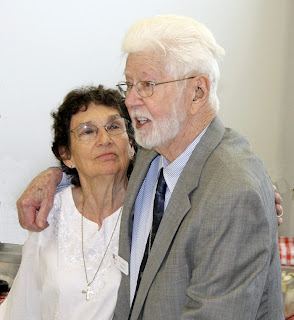 Sunday, August 29, 2010
We were privileged to share in the 90th birthday party for Fr. John Keene at St. Christopher Episcopal Church in Ft. Worth, Texas. A delicious barbecue luncheon with all the trimmings was provided and there was such a crowd it took three cakes to treat everyone to birthday cake.

He has been married to the lovely Jeanneane for some years after having been widowed. (See Photo) He has six grown children and numerous grandchildren and great grandchildren, a number of which were in attendance at this special affair.

Fr. John was born in Hackensack, New Jersey and held many jobs from an early age including pumping gas, setting pins in a bowling alley, delivering ice and assistant manager in a movie theater. He piloted P-40's and C-47 transports in the Army Air Corps during the war. After the war, he earned a Bachelor's degree in Education from Rutgers University in New Jersey and a Master's degree in Hospital Administration from Columbia University in New York. In 1956, John felt the call to the ministry and enrolled in Episcopal Theological School in Cambridge, Massachusetts and was ordained a priest in 1958.

We feel especially blessed to know this wonderful gentleman and to have participated in this milestone in his life, becoming a nonagenarian.

This is all I have to say for now.
Posted by C C Crittenden at 8:32 AM