Sunday, June 12, 2011
After enjoying our usual late Sunday breakfast, on this our 12th wedding anniversary, Doug and I got ready and went to Theater Off The Square (TOTS) to see The Somewhat True Tale of Robin Hood. 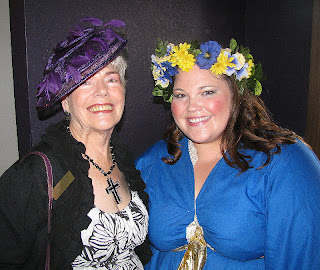 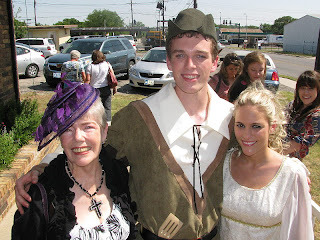 Carla with Alex Enslow "Robin Hood"
and Brittany Morgan "Lady Marian"
This play is so much fun and the actors had so much fun doing it. It is extremely campy, but who cares? They carried it off in fine style. Doug had his trusty smaller camera with him and took a couple of shots afterward to commemorate the event.

We left there and drove to the Tokyo Seafood and Steak House in the Lowe's shopping center on I-20 for dinner. It is Habachi style and we always enjoy the food cooked by hilarious chefs doing tricks with their spatulas and forks. I highly recommend this restaurant.

We came home, got comfortable and wore ourselves out cheering for the Dallas Mavericks. How about those World Champions of Basketball? It was a thrilling end to a perfect anniversary and we're looking forward to many more (anniversaries, that is).
___________________________
I feel I've been remiss in not sharing with you books I've recently read. I found "The Paris Wife" by Paula McLain interesting reading, but not that exciting.

"Follow the River" by James Alexander Thom, a novel based on the true ordeal of Mary Ingles, was chock full of interesting facts about the Comanche Indians, her being taken by them, living among them and subsequent escape. The story of her survival in trying to return to her husband is most difficult to read. This book like an earlier one I read "Unbroken" by Laura Hillenbrand, is definitely a story of incredible human survival against all odds. I wanted Follow the River to be over long before it was. The suffering is almost more than a human can bear even just reading it.

I am currently reading "A Singular Woman: The Untold Story of Barack Obama's Mother by Janny Scott. It is well written, but with a lot of repetition concerning her work in Indonesia and many other Eastern countries in anthropology, banking, farming, etc. I am about three/fourths of the way through it and will finish it because she really was a remarkable woman.

I also read "Sons in the Clouds" by Randy Mitchell. Randy is a new author and this is a well written novel. It reads rapidly and the setting is in Dallas, Texas around White Rock Lake which struck a chord with me. You really need to pick this one up and give it a go.

If I haven't mentioned it, I have now published my second book, one of a series of three written for young people. The overall title is "Cherokee Adventures" with Book 1: Linnie and Aaron being loosely based on my great-great grandparents. You can order it at lulu.com. Book 2: Fort Gibson at Last, is slated for publication in August, 2011. Reminder, I write under my maiden name, C. C. Crittenden.