Tuesday, July 12, 2010
It has been a busy week since we last communicated. On Tuesday, July 6th, I drove to Frisco to consult with my publicist, Mary Sam Stoddard, about an upcoming radio interview and a video shoot. We went through a trial interview and she was able to give me good advice on how to present myself and how to answer questions that might be posed by the interviewer. Afterward, she treated me to lunch at TGI Friday's and we had a lovely visit. Mary loaned me a book very dear to her that she received years ago from her cousin, "The Indian How Book" by Arthur C. Parker. It was published in 1913 and I'm using it for research for my upcoming book.

Wednesday was another day of beauty and I had my hair cut and nails done, again in anticipation of this video shoot taking place at the same time as the radio interview.

Swallow update: They are definitely setting on the nest again so we will soon have more babies.

Thursday, the book club met at PJ Webb's lovely home. We discussed the book, "Grace & Gumption" edited by Katie Sherrod. I've already given my opinion of this book so won't belabor it here. I am excited that we are reading "Ride the Wind" by Lucia St. Clair Robson. I had already started it and only have 150 pages to finish. The gals meet at my house next time and I'm to lead the discussion on this book so hope I do well.

Friday was the PCWNC luncheon in Alkek Hall of Weatherford College. Dispite the rain, we had a large group and the all salad luncheon was quite delicious. Our entertainment for this meeting was Alice Ann Holiday who does a marvelous Patsy Cline. She brought a special treat for us in the person of "Willie Nelson" and he really did a great job.

Saturday is finally here and I'm off to Grand Prairie for a two hour interview by Kaye Fullylove on Radio Station KKDA-AM, Soul 73. My personal radar wasn't working well and even with the GPS, I managed to turn the wrong way and get horribly lost. I was about ten minutes late, but even with that she managed to cover it until I could get myself settled. Mary Stoddard was also in attendance along with the videographer, Frederick. Mary and I both think the interview went well and she heard from Kaye later that the listening audience gave good feedback. 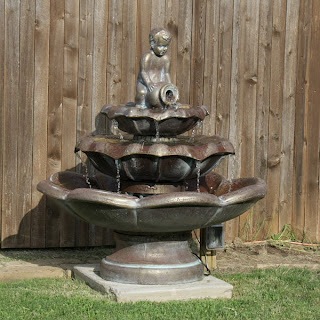 While I'm off running around and doing my thing, Doug has been at home working on some longed for improvements. We've been here almost three years now and our lovely big bird fountain has laid scattered about the back yard this whole time. It is now flowing and I know the birds are going to love it when they decide it is safe. (See Photo)

He got so ambitious with his honeydew's that he decided to make a housing for the generator, which we have in the event of a "what if?" This is one more thing out of the garage. We may be able to actually park a car in it one of these days. Doug did a great engineering job on this housing that started out at Lowe's and it looks quite tidy setting in the backyard. (See Photo) 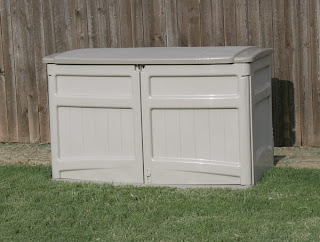 Monday, I played Canasta with the girls at Antonio's where we also ate lunch. We only had two tables of four, but just enough for it to be fun. Then on Tuesday, I did my volunteer two hours at the Weatherford Library. In my spare time I've been asking people for donations for the Silent Auction at the Wild West Women of Weatherford Red Hat Chapter's Redneck charity event for Freedom House. This takes place on July 24 at Couts Methodist Church Gym starting at 5:00 p.m. Chapter members have even created a redneck band and decorations are going to be hysterical.

This is all I have to say for now.
Posted by C C Crittenden at 5:12 PM