Every morning at the breakfast table, Doug and I have what we call an "intelligence briefing" in which we discuss news items we've gleaned off the Internet from various sources along with our Weatherford Democrat newspaper and the Star Telegram from Ft. Worth, Texas.

For some reason, an article in the Star Telegram caused both of us to break out into laughter. The headline is "BP is up to here in hair but says it doesn't need it". This alone started us chuckling along with my comment, "This could be the hairiest story of the year."

The article is written by AP's Lisa Orkin Emmanuel. She states that boxes are piling up with hundreds of thousands of pounds of hair, pet fur and fleece in 19 warehouses throughout Alabama, Mississippi, Louisiana and Florida.

Evidently there was a mis-communication between BP and the U. S. Coast Guard with a nonprofit organization called Matter of Trust based in San Francisco.

Chris Watts, co-owner of a pet-care facility in Dallas has collected about 500 pounds of animal hair. UPS has donated free shipping for up to 1,600 pounds.

People can still feel good about trying to do something to let the people in the affected areas know they are not alone. Were it not such a serious situation, it would be a hysterically funny comedy sketch. After all, Americans' strength comes from being able to laugh in the face of tragedy and destruction.

On another note, I happened to catch This Week on TV with Jake Tapper. The round table was discussing the Arlen Specter/Joe Sestak fiasco. The consensus of opinion seemed to be that this was just politics as usual and saw no wrong in it although one table member did point out that this damages the Obama brand. No one ever approached something that went through my mind during this discussion. What if Obama, feeling pressured to show some support for Specter because he defected, found a way to make a show of support while, in actuality, knowing that Specter could not be elected in the Fall? I believe this came out exactly the way Obama desired. 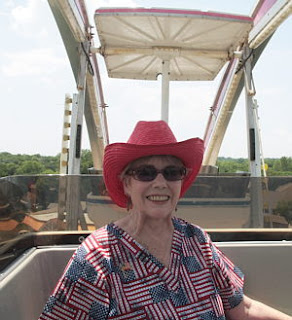 We went to an old fashioned carnival in downtown Weatherford this afternoon. This carnival is out of Lufkin, Texas and they must have at least 25 different rides as well as dart throwing, ball throwing, yellow duckies in a tub of water, etc. There were no ring or coin toss games though. If it 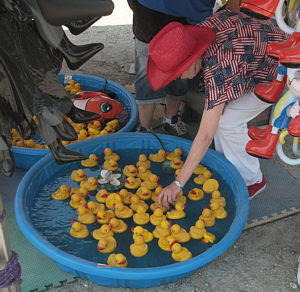 weren't for my back problems, I would have ridden the bumper cars. I love those things. Doug and I rode the Ferris Wheel and I won a soccer ball and a blow up fish picking duckies out of the water. Doug took many photos, but we didn't stay very long due to the 95 degree heat again today.

On the way home, we stopped at Wanda's Cafe for some fine down home food. I had chicken and dressing, corn and green beans and salad. Doug had a catcher's mitt size chicken fried steak with potatoes and gravy. This all went down well with our huge glasses of ice tea. Wanda's burned down a few months back and they have rebuilt a really nice restaurant.

Afterwards, we drove to Walmart and bought Daisy (our golden retriever mix) a new kiddie pool since the one she's had for two years has deteriorated. We brought it home, filled it with water and she immediately got into it and laid down. This dog knows how to stay cool.

This is all I have to say for now.
Posted by C C Crittenden at 2:10 PM